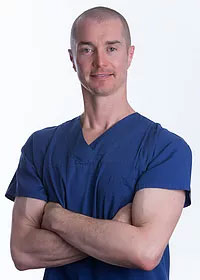 Associate Professor Andrew Kurmis is an Australian-trained Orthopaedic Surgeon, based in Adelaide, with subspecialty training expertise in hip and knee replacement surgery. He completed his undergraduate (pre-med) training in Medical Imaging at the University of South Australia in the mid- 1990’s, before completing an Honours year in musculoskeletal MRI of the knee. A/Professor Kurmis went on to study graduate entry medicine at Flinders University, finishing as the Dux of his graduating class and also being awarded the prestigous University Medal. He subsequently worked in Victoria and the Northern Territory before returning to South Australia to complete his advanced specialty training in Orthopaedic Surgery. Outside of Australia, A/Professor Kurmis’ professional journey has been heavily influenced by a number of international roles – in varying capacities – including time in Sweden, Germany, New Zealand, the United States, and Canada – the latter where he successfully completed fellowship training in primary and revision hip and knee replacement surgery. A/Professor Kurmis has also completed a highly successful PhD in Orthopaedic Surgery and subsequently also worked for 3 years as an Orthopaedic Post-doctoral fellow. He is an active researcher working towards improving patient outcomes having published nearly 60 peer reviewed journal articles and book chapters. He has also presented work extensively within Australia and internationally, often as an invited speaker. The quality and significance of A/Professor Kurmis’ work is exemplified by his receipt of the 2017 Frank Stinchfield Prize, awarded by the International Hip Society at the American Academy of Orthopaedic Surgeons meeting in San Diego for outstanding contribution to the field of hip replacement related research. This prize is widely acknowledged as the most prestigious international award in the field of hip replacement research.

A/Professor Kurmis remains heavily committed to medical & surgical education and has received a series of formal teaching awards, including being awarded the Royal Australasian College of Surgeons 2021 Surgical Educator of the Year. Academically, he concurrently holds the honorary appointment of Clinical Associate Professor at both The University of Adelaide and Flinders University. A/Professor Kurmis is also a Fellow of the Faculty of Surgical Trainers, The Royal College of Surgeons of Edinburgh (UK), becoming only the 8th surgeon in Australia and New Zealand to receive this honour.

A/Professor Kurmis is also actively involved within the College of Surgeons as an Emergency Management of Severe Trauma International Course Director and Senior Faculty member and has sat on the National Committee for this important skills training division since 2015. He is also the current Statewide Director for South Australia and the Northern Territory.

A/Professor Andrew Kurmis is an Australian-trained Specialist Orthopaedic Surgeon, based in Adelaide, with expertise in hip and knee replacement and revision surgery.